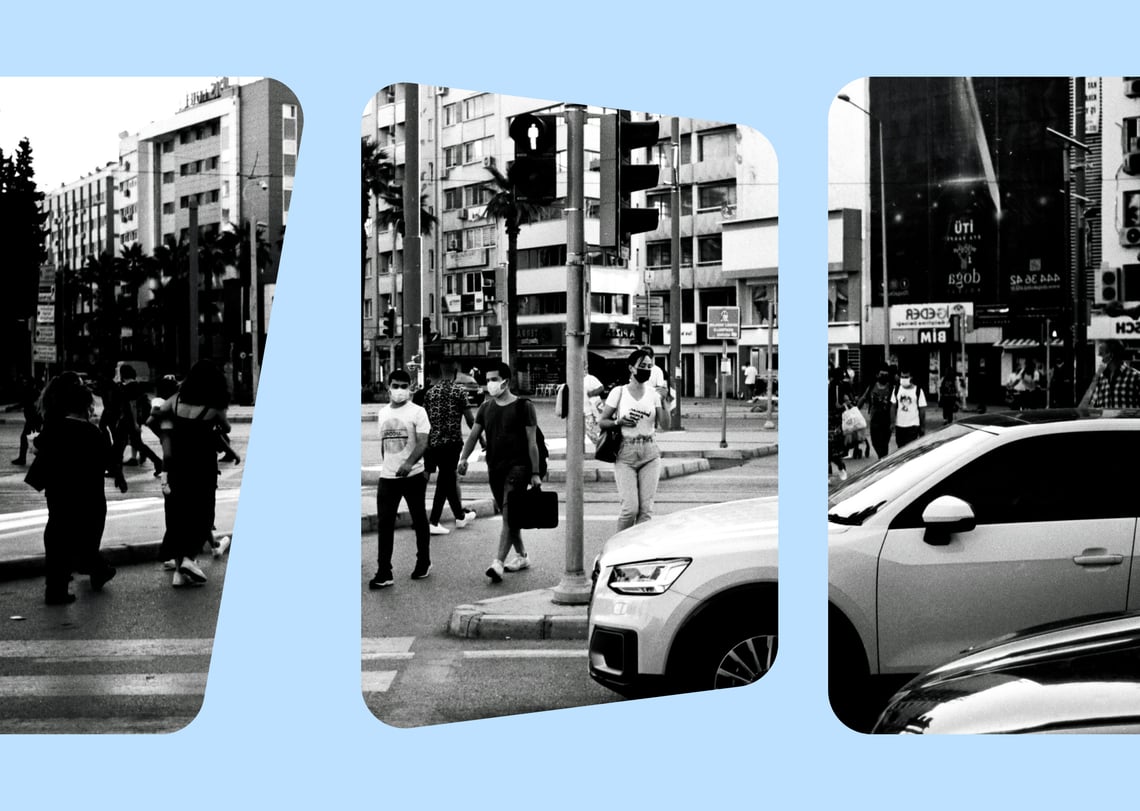 Kevin Hart's car collection is the stuff of legend. The comedian and actor is known for his love of luxury cars, and he's amassed quite a collection over the years. The Kevin Hart Car Collection is a must-see for car enthusiasts, and one of the main reasons why we have created this blog post today! He's not only known as one of Hollywood’s top stars but also happens to be one of the top dogs in the industry when it comes to classic car collections...

In this article we are going to take you on a journey from the Pontiac era to Kevin Hart's Ferrari collection. Buckle in and get ready, welcome to the Carmoola blog...

Who is Kevin Hart?

If you have been living under a rock for the past decade, Kevin Hart is an actor and comedian known for his quirky personality. Kevin is a Philly boy through and through and was born on July 6th, 1979 in Philadelphia’s Fairmount Park neighbourhood. The younger Harts' first job involved selling homemade candy bars door-to-door, whilst walking around downtown Philly during the summer break during grade school years (primary school). The rest...well you know how it goes by now— he has starred in movies such as Grudge Match, Central Intelligence & Ride Along. There isn't a screen you won't find Kevin Hart on, as he has also dominated YouTube, Instagram & TikTok with his vibrant personality and hilarious jokes. 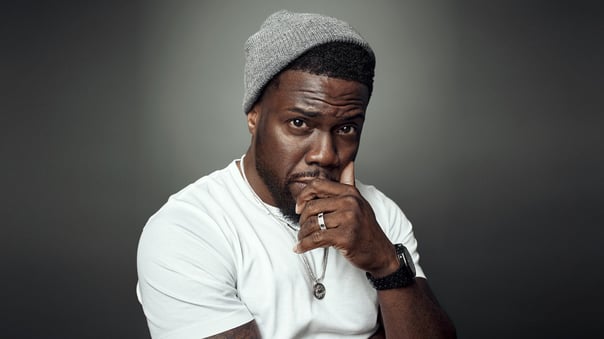 As mentioned above, Hart owns 20+ cars and as much as we would like our editing team to be there all day reading through every word we have sprawled on this sheet, we don't think it would be a very good read if we have 20 cars on this blog post. So, we are including our top 6!

When Kevin Hart’s Ferrari 488 GTB was up for sale, it had already collected a number of world records. With an estimated price tag of around £220k (which was waved for an IG post that you can see below), this magnum opus is one you won't want to miss! Not only does the vehicle have 661 horsepower and can accelerate from 0-100 miles per hour within six seconds; but its 3 nine-litre engine also produces over 500 lb.-ft torque which means there are literally no limits on how fast you can go! If we are being honest, there is, but if anyone reaches the 205 MPH top speed, we will be very impressed! 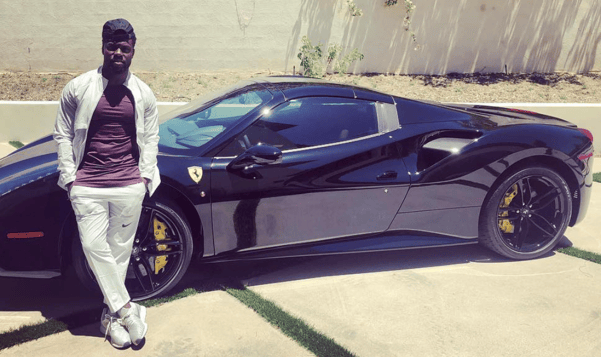 It's the 60s! Kevin took it all the way back with this beauty of a vehicle. After purchasing the Mustang, Kevin had it completely restored like new. In addition to its existing features, Kevin also got several additional features added to his Mustang Eleanor. This includes the installation of an automatic transmission system since Kevin openly admits his preference for this option over a manual drive. It's OK Kevin, you can admit to us that you can only drive automatic - no judgment here. 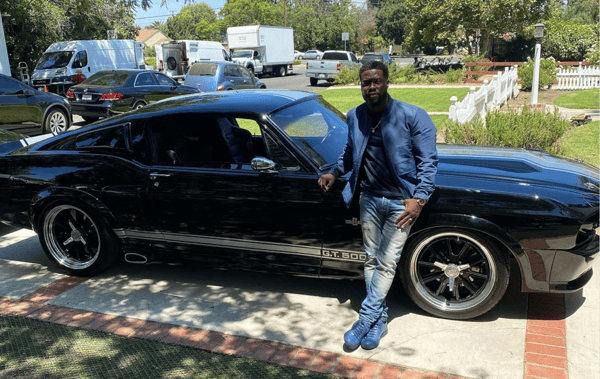 Are we still in the 60s? You betcha. Another classic car we see in Hart's collection is the 1966 Pontiac GTO. Considering the large number of pictures we see Kevin posting with his Pontiac GTO, this might well be one of his favourites, and we are going to say - his daily driver. Although he might have to think about that now the new UK emission rules have come into play. The Pontiac doesn’t pack as much power as some of the other cars in this blog post, but the vintage appearance makes up for that. Style points +1. 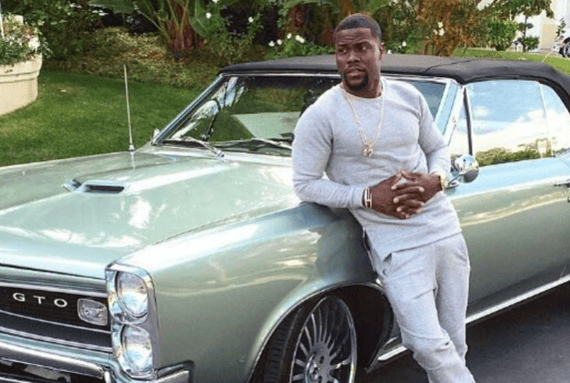 Loyal readers of the Carmoola blog know the iconic Range Rover line. However, over recent weeks we have seen a lot more celebrities going for the ever-reliable Mercedes-Benz. This leads us to crown the Merc as the new king of basic celebrity cars 😂. However, there is nothing basic about the SLS AMG. The car features 563 horsepower and can get to 60 miles per hour in just 3.7 seconds. The car is powered by a V8 6.2-litre engine. The body has an aluminium design, making it lightweight – perfect for times when Kevin is late for a shoot. 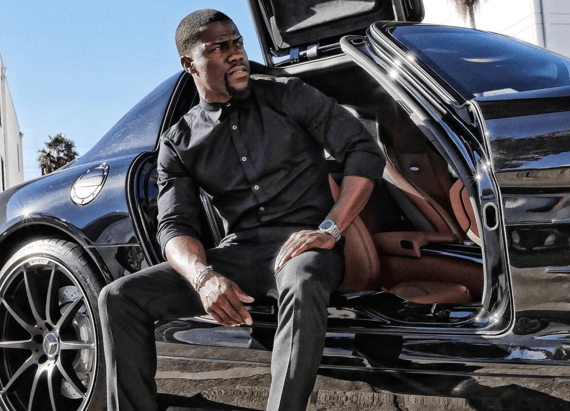 After featuring in the remake of the hit movie, Jumanji, Kevin developed a more adventurous side – which is one of the main reasons he often shows off his Jeep Wrangler. Kevin often talks about this vehicle on his YouTube show and one thing that you will notice immediately is that the Jeep Wrangler has been modified. There are several modifications we can see when comparing this Jeep to the original model. Here’s the thing – Kevin didn’t actually buy the Jeep himself. Instead, he posted a shoutout picture on his Instagram of 149 million followers, and they threw the Jeep in as part of the deal. 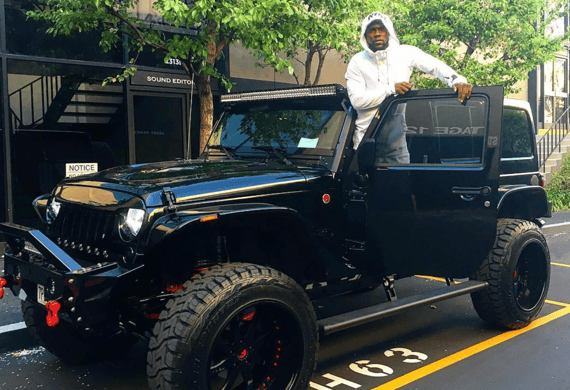 The final car of today's blog post, and we may have saved the best til' last here guys! 'White Lightning' as Kevin likes to call it - The Ferrari 458 Spider. The roof on the car automatically lowers and the car is powered by a V8 engine, offering Kevin a whopping 562 horsepower. We have done a lot of these car blogs now, and we don't think we have seen anything quite like this picture. #swag. 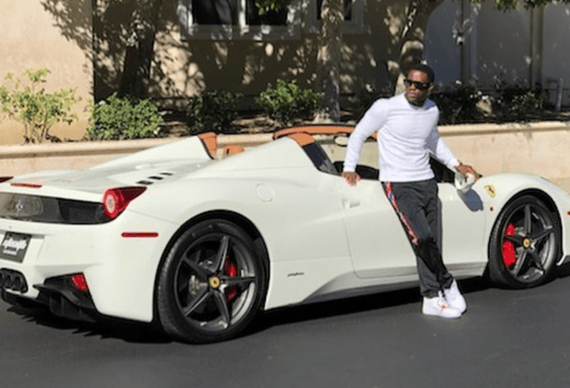 Love him or loath him, we have to say, we're pretty jealous of Kevin Hart's car collection. He has some amazing cars that any petrol head would love to get their hands on.

If you are looking for your very own Kevin-approved car, check out our online car finance calculator. It can give you an estimate of the repayment amount to expect for your desired budget.